Amazon has our newest book, THE COBURGS OF EUROPE, listed now.

The book's cover is representative of its content. The upper half is green, the lower half is white. These were the colors of the Duchy of Saxe-Coburg & Gotha.

The photo chosen for the cover features the nine monarchs present at King Edward VII's funeral in 1910. Among them are four male-line Coburgs: King George V of Great Britain, King Ferdinand of Bulgaria, King Manoel II of Portugal and King Albert I of Belgium. Of the other five featured: King Alfonso XIII of Spain and King Haakon VII of Norway married granddaughters of Queen Victoria and Prince Albert; Kaiser Wilhelm II was a grandson of Queen Victoria and Prince Albert, while his wife was a granddaughter of Queen Victoria's half-sister, Fürstin Feodora of Leiningen; George I of the Hellenes and Frederik VIII of Denmark, were brothers-in-law of the late Edward VII, while several of their descendants eventually married Coburgs.

Illustrating the dynasty's power, are the coats of arms of the five thrones occupied by Coburg men in 1910: Belgium, Portugal, Saxe-Coburg & Gotha, Great Britain and Bulgaria.

The book is a large coffee-table style production. It has 376 pages in glossy paper finish and includes well over 500 unique images of the various branches of the Coburg family. Many of these images have not been published in books before!

It will also be available through Amazon.co.uk at a later date! 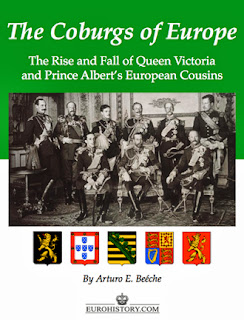