The Gotha: Bicentennial of the Battle of Leipzig

On 19 October, members of the Gotha gathered in Saxony to commemorate the bicentennial of the Battle of Leipzig.

Among them were: The Margrave and Margravine of Meißen, Grand Duke George Mikhailovich of Russia, Prince Michael Benedict and Princess Dagmar of Saxe-Weimar-Eisenach, Archduke Georg of Austria and his wife, Prince Heinrich of Hannover and his wife, Fürst Heinrich XIV and Fürstin Johanna Reuß, Fürst Alexander zu Schaumburg-Lippe, Fürst Alexander zu Sayn-Wittgenstein-Sayn and Duke Rudolf and Duchess Alexandra of Croÿ. Also descendants of other military leaders who participate din the battle were present, among them Blüchers and Beauharnais. 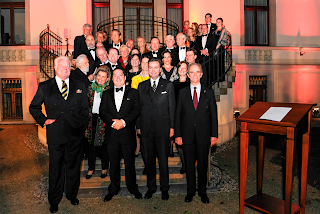 (Courtesy of HRH The Margrave of Meißen)