Funeral of The 7th Earl of Harewood

IT was the end of an era, said one mourner as she left the village shop just yards from Harewood House to attend Lord Harewood’s funeral today.

A first cousin of the Queen, he had been lucky to escape with his life while a young man during the Second World War when his death warrant was personally signed by Hitler.
Having survived this setback - thanks to an SS soldier’s canny reading of the shifting times - George Lascelles comfortably rode out the rest of his life though it was not without its stormy moments.

Today the black and gold Harewood coat of arms flag flew at half mast as around 100 members of staff lined a road outside the stately home in warm sunshine and watched the funeral cortege pass by. 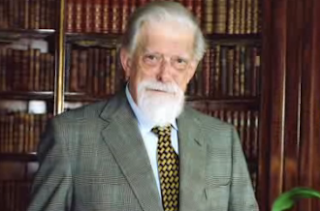 http://www.yorkshirepost.co.uk/news/at-a-glance/main-section/video_ken_bates_and_lesley_garrett_join_final_goodbye_to_the_earl_of_harewood_with_video_1_3584320
Posted by Unknown at 10:31 AM