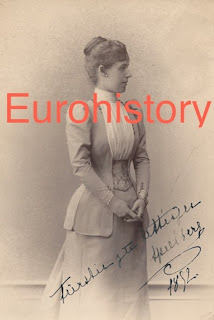 I purchased this beautiful photo at an auction in Berlin two weeks ago. It was a hard fought battle, but luckily I succeeded and now this amazingly rare, signed photo is part of the Eurohistory Archive!

But who is the lady in question, my readers may wonder?

She is Princess Sophie von Metternich (1857-1941), eldest daughter of Fürst Richard von Metternich (the Austrian Chancellor's eldest surviving son...who was Austrian ambassador to France during the reign of Napoleon III) and of his wife, and niece, the former Countess Pauline Sándor von Szlanicza (1836-1921), one of the most famous luminaries at the court of Napoleon III and Empress Eugenie. Pauline was the daughter of Princess Leontine von Metternich (1811-1861) and of her husband Count Moritz Sándor von Szlanicza, who died in 1878.

It was Sophie's sister, Princess Klementine who adopted Franz Albrecht, Sophie's grandson. Since the adoption, which took place in the late 1920s, Franz Albrecht and his descendants have used the last name "Metternich-Sándor."

The Ratibor und Corvey family owned vast estates in Central Europe. These estates included the duchy of Ratibor in Upper Silesia. The title of Duke of Ratibor was acquired by Landgraf Victor Amadeus of Hesse-Rotenburg in 1821. King Frederick William IV of Prussia, in 1840, granted it to the landgrave's nephew Prince Viktor of Hohenlohe-Schillingsfürst, in turn for his renunciation of the Hohenlohe inheritance in favor of his younger brother Chlodwig, who later became German Imperial Chancellor during the reign of Kaiser Wilhelm II.

From Landgraf Victor Amadeus, the last of his line, Prince Viktor of Hohenlohe-Schillngsfürst (1818-1893), who became the Duke of Ratibor and Prince of Corvey, besides Ratibor, inherited the impressive estate of Corvey in Westphalia. In Austria, the family owns one of the country's most beautiful estates, Schloß Grafenegg (https://www.grafenegg.com/home/en), site of a renowned summer music festival.

Although the family's once vast estates in Silesia and Bohemia were lost after the end of the Second World War, there was still quite a bit left. The remaining estates inherited by Franz Albrecht, only surviving so of Princess Elisabeth and Duke Viktor III.

His son Viktor IV is the current Duke of Ratibor, Fürst of Corvey. 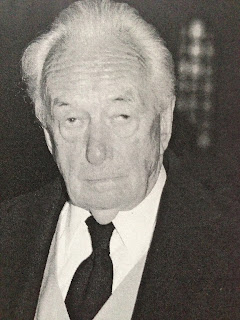 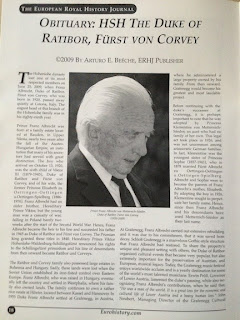