Baron Zdenko Hoenning-O'Carroll, her father, married secondly Princess Adelgunde of Bavaria (1917-2004), one of the daughters of Prince Franz and his wife Isabella, born a Princess of Croÿ. Baron Zdenko, who owned the estate of Sünching, east of Ingolstadt in Bavaria, was born in 1906 and died also at Sünching in 1996, just months before his ninetieth birthday.

Due to Zdenko's married to Princess Adelgunde, descendants from his first marriage to Margarite of Lobkowicz were riased in close contact with members of the Bavarian royal family. It was not surprising then that one of his granddaughters, Countess Alexandra Miloradovich, married then Hereditary Prince Rudolf of Croÿ, a grandson of Crown Prince Rupprecht of Bavaria and his second wife, the former Princess Antonia of Luxembourg.

Duke Rudolf of Croÿ is the eldest son of the late Duke Carl, 14th Duke of Croÿ, and of his wife Princess Gabriele of Bavaria. In 1987 Rudolf married Alexandra at Sünching. The couple now has six children and lives in Merfeld, close to Dülmen. Duchess Alexandra's mother had relocated to Dülmen several years ago. It was there that she died unexpectedly.

The Royal House of Bavaria 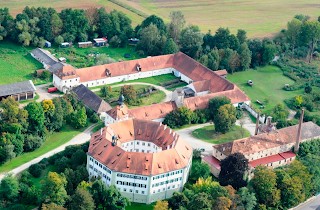