One of the many joys of seeing one's work come alive in book form is the arrival of each of the pieces that will, once put together, become a book!

Today I received the proofs of the cover for APAPA – King Christian IX of Denmark and His Descendants!

I love it...so vibrant...the Dannebrog in the background with the beautiful Danish royal coat of arms topping a group photo of King Christian IX and many of his descendants.

Now...a little more about the Dannebrog...


The History and Legend

The name of the Danish flag, the Dannebrog, meaning ‘the flag of the Danes’ or ‘the red flag’, is first encountered in a Danish text from 1478 and in a Netherlandish text from 100 years before that.
In a Netherlandish armorial (Gelre) from 1370-1386 a red banner with a white cross is annexed to the coat of arms of Valdemar IV Atterdag.
According to legend, the Dannebrog fell from heaven during a battle in Estonia; this legend is mentioned in Christiern Pedersen’s Danish Chronicle from the beginning of the 1520s and by the Franciscan monk Peder Olsen c. 1527. This latter relates the event to a battle in 1219, and tradition has maintained that the flag appeared at Lyndanisse on 15 June 1219.
The legend presumably came into being around 1500 on the basis of the idea that the royal banner which King Hans lost at his defeat in the Ditmarshes in Northern Germany in 1500 was the Dannebrog that had fallen from heaven. In 1559 Frederik II recaptured the banner and had it hung in Schleswig Cathedral in present-day northern Germany.
In a song from the campaign of 1500 the banner charged with the cross is associated with the Roman Emperor Constantine’s dream of the cross in 312 before the battle in which he became absolute monarch in the Roman Empire and according to tradition was converted to Christianity.
This vision of the cross, to which are linked the words in hoc signo vinces (‘under this sign you shall be victorious’) is the prototype of the miracles in the shape of crosses in the sky, which particularly in the Iberian Peninsula were connected with battles between Christians and infidels.

The Cross of the Dannebrog

A white cross formy with a red bordure was used by the Portuguese Order of Christ that was founded in 1318 during a crusade against the Moors. The Portuguese gold coin, the portugalese or português, reproduced the Cross of Christ and the words in hoc signo vinces.
From 1591 Christian IV struck Danish coins with a similar cross which quickly became associated with the cross of the Dannebrog. 1603 saw the addition of Constantine’s apophthegm, which Arild Huitfeldt had quoted in his Chronicle where Constantine’s vision and the legend of the Dannebrog falling from heaven are also compared. 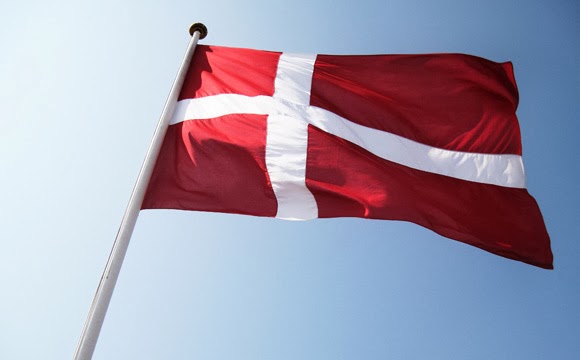