Marie-Chantal, a fashion designer, illustrator and children's author, is one of the celebrated socialite "Miller sisters" and daughter of billionaire Robert Warren Miller. She was 26 when she married the handsome prince, whom she met at a 1993 New Orleans dinner party. The prince, then 28, and his future princess would later declare it was love at first sight. "I knew [Pavlos] was the person I would marry," the princess told Vanity Fair in 2008.

Prince Pavlos is the eldest son of Greek King Constantine II and Queen Anne-Marie, exiled since their throne was toppled in a 1967 coup d'etat and the monarchy abolished in 1973. They reside in London. 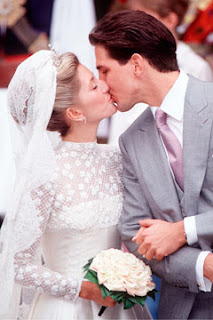 
http://www.stylelist.com/2011/01/28/great-royal-weddings-crown-prince-pavlos-of-greece-and-marie-ch/
Posted by Unknown at 1:14 PM