This is a book review published in the UK. Eurohistory is carrying this book. If interested simply get in contact with us!


–//–
All books about the fall of the Romanovs leave one with an uneasy doubt that we have ever heard the full story.

It was complicated for decades by doubts about the murder of the Tsar and his family, the supposedly missing remains, the unanswered questions about whether George V did or did not attempt or even want to rescue them.

This addendum to the story concentrates entirely on the rescue mission that was sent on the King’s initiative to evacuate the Tsar’s mother, the dowager Empress Marie and her entourage, from the Crimea.

It was carried out in the nick of time before the Bolsheviks reached Yalta, where the surviving Romanovs were confined to their summer estates. It was entirely successful. In April, 1919, HMS Marlborough carried off the Empress and 17 members of her family at the head of a small fleet of vessels rescuing White Russian refugees who had swarmed to the port.
An intimate diary of the voyage to Malta has been constructed by Frances Welch from the diaries and memoirs both of the passengers and the crew, especially the Marlborough’s first lieutenant, Francis Pridham, who found himself in the anxious position of purser to the crews. His was the worry of finding suitable cabins for a quarrelsome set of relatives acutely conscious of status and protocol - by no means a united family.

Besides soothing their temperaments, sorting out their luggage and overseeing their menus, he found time to keep a diary of events, the prime source for this close-up of this weird, quirky family party, thrown together by events they still did not comprehend. Dark but tantalising photographs give us glimpses of them.

By the end of the short voyage one does feel a certain sympathy for them, tempered by an impatience that such an inadequate family happened to exercise supreme power over an empire.

The leading characters on the voyage were first and foremost the dowager Empress Marie Feodorovna, mother of the Tsar. She was an awkward customer for two reasons: she refused to believe that her son and his family were dead, and strongly objected to leaving Russia under the impression that the revolution could soon be over and she would be going back to St Petersburg.

At that time, 1918, it was still possible for her to believe this. The execution of the Tsar, but not of his family, had been tersely announced. But rumours abounded of their secret removal to a hiding place - possibly a Siberian monastery. Meanwhile the uncertain grip of the Bolsheviks on the country was hotly disputed by White Russian armies in civil war.
George V, as we now know, changed his mind about the original invitation to the abdicated Tsar to come to Britain.

He feared it would cause unrest - the Russian revolution had many sympathisers. Unfairly he later laid the blame on the Prime Minister, Lloyd George. But this time he had no choice. 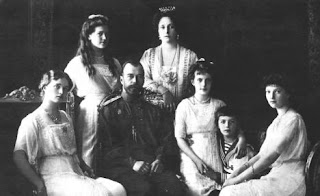 Read more: http://www.dailymail.co.uk/home/books/article-1344746/All-sea-Russian-royal-family-THE-RUSSIAN-COURT-AT-SEA-THE-VOYAGE-OF-HMS-MARLBOROUGH-APRIL-1919-BY-FRANCES-WELCH.html#ixzz1ASHWattF
Posted by Unknown at 6:47 AM