The European Royal History Journal, Issue LXXVIII off to print!

This puts us back on schedule and both Issues LXXVII and LXXVIII will mail together, along with renewals, to all subscribers.

Inside ERHJ LXXVIII readers will find the following articles:

1. The Triumphs, Tragedies, and Scandals of Kaiser Wilhelm II's Daughters-in-Law

4. An Invitation to the Coronation of Tsar Nicholas II

7. The Engagement of Prince William of Wales and Miss Catherine Middleton 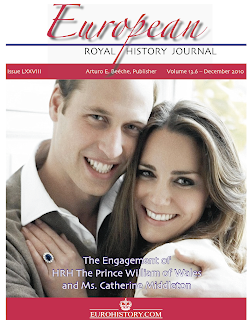