Pittsburgh, 8 January 2011 –Their Royal Highnesses Crown Prince Alexander II and Crown Princess Katherine, together with the Hon. Branko Terzic, member of the Privy Council and his wife Judith, attended Christmas divine liturgy January 7 at the Holy Trinity Serbian Orthodox Cathedral in Pittsburgh, Pennsylvania. The liturgy was served by His Grace Bishop Mitrophan of the Eastern America Diocese and Rev. Rajko Kosic, the cathedral dean. Their Royal Highnesses were enthusiastically greeted by hundreds of faithful in front of the Church.

The previous day Their Royal Highnesses attended the procession and traditional Christmas Eve burning of the Yule log ceremony at St. Elijah Serbian Orthodox Church in Aliquippa, Pennsylvania. There a large procession of parishioners was led by His Grace Bishop Mitrophan of the Eastern America Diocese and the parish priest V. Rev Stepan Stepanov. A reception and program followed with children of the parish performing songs and dances from Serbia for the Royal couple.

Their Royal Highnesses Crown Prince Alexander II and Crown Princess Katherine were then guests of honor at a dinner hosted by Dr. Robert M. Friedlander, Chairman of Department of Neurological Surgery at the University of Pittsburgh School of Medicine.

During their two days stay in Pittsburgh, Their Royal Highnesses met with prominent members of Serbian Diaspora, such as Ms. Cissy Rebich , General Manager of Serb National Federation, gave interviews to Serbian and United States media and met with numerous citizens of Serbian descent living in this area. 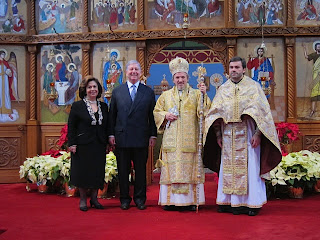 http://www.royalfamily.org/statements/state-det/state-2340_eng.html
Posted by Unknown at 8:12 AM