Why the Pahlavis Still Haunt Iranians

When the Pahlavi monarchy was approaching its final days in power in Iran, I was playing with Cabbage Patch Kids dolls in Cupertino, Calif., and thought that my friends' parents who worked for Apple ran an orchard. The diaspora community of Iranians around me talked politics incessantly, and I remember hearing vastly varied things about the Shah of Iran, who lost power in the 1979 revolution. Some of my relatives credited him with great feats, like transforming Tehran into a modern city; one elderly great-aunt kept a portrait of him and his wife, the Empress Farah, on her bedside table. Others called him a torturer, and avoided the Iranian man at the neighborhood pool with the Shah's face tattooed on his shoulder. He was a former agent of the SAVAK, the Shah's dreaded secret service, and he seemed to inspire a shadow of terror even in the California sunshine.

I grew up to study political science and work in Iran as a reporter, and managed to develop an adult understanding of the Pahlavi family's role in Iranian history. But that mature knowledge coexists with all the associations I absorbed as a child. Like so many Iranians, I find my feelings toward the Pahlavis a complex jumble of personal dreams and resentments, and the intensity of my emotions reminds me that they have as much to do with my past, my family and my relationship to history as the royal family itself. 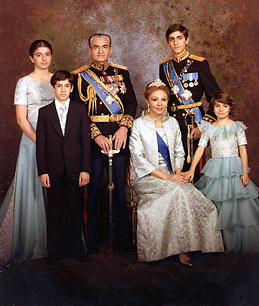