The latest installment of the European Royal History Journal is off to the printers.

In it we have included some very interesting articles, as usual, written by among today's most talented and recognized royal authors.

The articles included in ERHJ LXXVII are:

1. The Tsar’s Daughters in Exile – Xenia and Olga of Russia, By Coryne Hall

6. The Overthrow of King Manuel II of Portugal, By Arturo E. Beéche 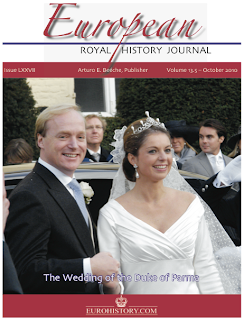 In the meantime, we began working on Issue LXXVIII, Volume 13.6, which is scheduled to print in about two weeks if not sooner and will mail by month's end, thus bringing to an end our XIII year in publication, and perhaps the toughest yet. However, with restored health and continued support from you all, we are looking toward a wonderful 2011!

http://www.eurohistory.com/main.php?process=1
Posted by Unknown at 7:18 PM