A Habsburg Returns Home to Poland

Princess Marie Christine of Altenburg (b. 1923), eldest daughter of Archduke Karl Albrecht of Austria and his morganatic wife Alice Ankarkrona (created Princess of Altenburg), has returned to live at Zywiec Castle, in Poland, home of her parents. Marie Christine was born at this family property, as were her two younger siblings.

The family of Archduke Karl Albrecht departed Zywiec as the Russians invaded and Poland fell under Communist control. In the process the archduke's vast properties were lost to the Communist yoke.

Marie Christine occupies two pieces  she rents within the vast palace. "Funny, no," she said, "I'm a renter in my own home!"

However, she remains a happy renter. "I'm delighted to be back in the home where I was born, where I lived my early years," reminisced the pious, black-draped august lady, who is a Dame of Honor of the Sovereign Military Order of Malta.

Back in 2001 the Zywiec local authorities invited Princess Marie Christine to return. They suggested that she inhabit a small apartment in the first level of the palace. this piece would give her ample access to the palace's beautiful gardens, where she had spent many long-forgotten days in years gone by.

"When the village invited me to return, I did not think of it twice. No hesitation. I sold my apartment in Switzerland and moved to Zywiec. I am very happy here where I am treated like a queen, a Habsburg who is completely Polish!," said the princess.

"The family have not sought to recover their properties or the palace, which now houses a school, because it serves the local populace," said Tomasz Terteka, spokesperson of the municipality.

Little within the palace reminds one of its former luxury and glory. Antiquities, paintings, portraits souvenirs, objects, all gone now. The palace's furniture is now simple and modern. Within Marie Christine's own apartments there is no luxury, her companions are two cats and two social workers, who care for the princess.

Ancestors of Princess Marie Christine inherited Zywiec at the beginning of the XIX century, when Poland was finally partitioned between Russia, Austria and Prussia. It became one of the homes of Archduke Karl Stephan (1860-1933), a younger brother of Archduke Friedrich and Queen Mother Maria Cristina of Spain, after whom the princess was named. In a move designed to retain control of his vast properties (mostly locate din independent Poland), Karl Stephan adopted Polish nationality. At one point Polish monarchists suggested the archduke become their candidate for the throne of Poland, but their efforts failed.

This branch of the Austrian Imperial Family has been known for a very long time as the Polish Habsburgs. Princess Marie Christine agreed with this appreciation, "I am not Austrian. My mother tongue is not German, but Polish," she explained.

When war came in 1939, the princess' father, Karl Albrecht (a first cousin of King Alfonso XIII of Spain), refused to side with the Germans. An officer in the Polish Army, Karl Albrecht hd no interest in siding with Hitler and his goons. His decision, heroic and honorable as it was, had a high price. The Nazis' arrested Karl Albrecht and deported him to a labor camp, all the while expropriating Zywiec and thus forcing the family to relocate. Princess Alice was not to be intimidated by Nazi might and supported the Polish resistance with whatever resources she had, while her eldest son escaped and joined the Polish resistance in London.

At the end of the war the Habsburgs of Zywiec, whom the Nazis considered Polish citizens, where robbed by the Soviets of their Polish citizenship and thus chased from their properties as Austrian aristocrats. In 1947 the Communist government of Poland went a step further and expropriated all Archduke Karl Albrecht's properties, both real estate and industrial.

The inhabitants of Zywiec never forgot the Habsburgs and in spite of Communist efforts always retained a longing for an era now gone. In fact, their welcoming the princess back to Zywiec is their way of paying homage to her family's involvement with the area. Every birthday is the occasion for the local populace to show their princess how venerable she has become.

"She is our ambassador, she is a symbol of our patriotism, of identity with our region and with Poland, she is an example for all of us to follow," said Mayor Antoni Szlagor. 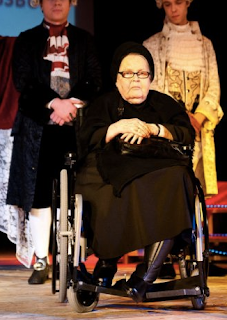 Quite an end for a lady who spent nearly sixty years in exile!
Posted by Unknown at 10:34 AM