‘THE PRO JUVENTUTE KALENDERS’ exhibition that Paleis Het Loo is mounting from 22 January to 8 May 2011 presents an overview of the forty-five years of popular calendars published by the Pro Juventute charitable foundation containing photographs of the Dutch royal family whose proceeds went to support disadvantaged children.

From 1948 to 1992 Stichting Steunfonds Pro Juventute published a calendar every year for a total of 45 years in all. Each month showed a photograph of the royal family that had been donated on the family’s behalf by the government information office. In the first decade these were photographs of the young princesses, Beatrix, Irene, Margriet and Marijke, as they grew up. They were taken during annual photo sessions in and around Soestdijk palace.

The proceeds from the Princesses’ Calendar, as it came to be called, went to help less fortunate children. The Pro Juventute charitable foundation was responsible for arranging door-to-door sales of the calendar and the allocation of the revenue. The calendar was a way for the young royal children to express their support for youngsters of their own age who were in difficult circumstances. The Princesses’ Calendar proved to be a resounding success and by the time the princesses had grown up it was rechristened the Orange Calendar because the royal family are descendants of the House of Orange. From then onwards the calendar also included  photographs of Queen Juliana and Prince Bernhard, though the general emphasis was on the young royals.

If you thumb through the 45 calendars you can see the two generations of the royal family growing up through the eye of the camera: Queen Beatrix and her sisters from the late nineteen forties onwards and from the late nineteen sixties Willem Alexander and his brothers and cousins. The exhibition offers a good impression of those decades. While in the early nineteen fifties the princesses pose in immaculate white dresses on the Soestdijk palace lawn, in the late nineteen seventies Willem Alexander and his brothers are wearing shorts, sturdy Kicker boots and brightly coloured T shirts and are sitting on a big pile of rough hewn stone underneath a tree. These pictures illustrate the changing image that the royal family has conveyed to the general public over a period of 25 years. While the black and white photographs from the nineteen fifties typically portray the princesses in a royal setting, many of the photographs from the nineteen seventies look a lot like snapshots from our own family albums of the time.

Diverse original calendars will be on display in THE PRO JUVENTUTE CALENDARS exhibition along with many reproductions of photographs from the calendars. The emphasis is on the thirty years between 1948 and 1979, when the calendar had its heyday. 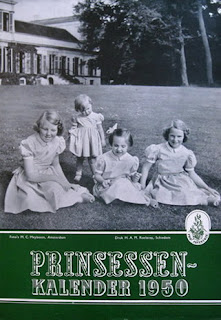 http://www.paleishetloo.nl/newsitem/168/2/3/The_Pro_Juventute_Calendars.html
Posted by Unknown at 8:20 AM