Princess-to-be Kate Middleton has left her job at her family's online business to prepare for her wedding day.

With less than 100 days to go until she marries Prince William, the 29-year-old has decided to give up her position at Party Pieces in order to oversee all the intricate details of the April 29 ceremony.

Kate is said to be at the helm when it comes to organising the wedding, spending hours with William at their rented farmhouse in Anglesey making plans.

"They've worked really hard, doing it their way, and they're nearly there," a member of the royal household tells HELLO! magazine this week. "They know exactly what they want. In the end it will be a traditional Anglican wedding. Don't, for example, expect a rock band to be performing inside the Abbey." 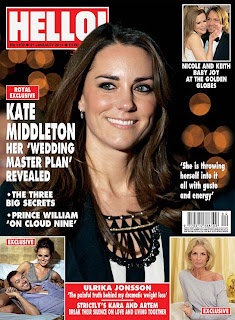 http://royalweddings.hellomagazine.com/prince-william-and-kate-middleton/20110125464/kate-middlton/quits-job/wedding-details/1/
Posted by Unknown at 7:39 AM