Prince William has gone on an impromptu walkabout ahead of his wedding to Kate Middleton to meet royal watchers gathered near Buckingham Palace.
He spent several minutes shaking hands, chatting and posing for pictures telling the well-wishers: "All I've got to do is get the lines right."

The couple say they have been "incredibly moved" by public reaction.

In a message in their official wedding programme they thanked "everyone most sincerely for their kindness".

During Friday's Westminster Abbey ceremony Miss Middleton will vow to "love, comfort, honour and keep" Prince William but will not vow to obey him.

The service will be the epitome of "Britishness", St James's Palace said.
VisitBritain has predicted more than 600,000 people will be on the streets to watch Friday's events and several hundred are already camping out in tents and sleeping bags outside the abbey and in The Mall.

Prince William, who is spending the evening with the Prince of Wales, Duchess of Cornwall and Prince Harry, emerged from his London home Clarence House to walk to The Mall at about 2030 BST.

Some of the the crowd were spending the night on the street and the prince asked them about their preparations.


Earlier, the Duchess of Cornwall also met some of the fans in The Mall. 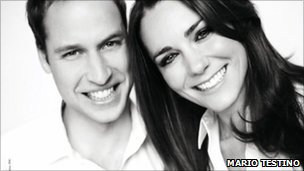