Royal Dinner at the Mandarin Oriental

The Queen has arrived at the Mandarin Oriental hotel in Knightsbridge for a pre-wedding dinner with various dignitaries. Lady Anson, the evening's host and the Queen's cousin, met her and was greeted with a kiss on both cheeks outside the hotel.


Earlier, the Princess Royal arrived by minibus along with Zara Phillips and Mike Tindall, and Peter Phillips and Autumn Kelly. Prince and Princess Michael of Kent, Lord Freddie Windsor and Lady Gabriella came in a separate coach.

Princess Victoria of Sweden and her husband Prince Daniel were also present.
Other guests included: the Duke of York, Princesses Beatrice and Eugenie, the Earl and Countess of Wessex, Prince Pavlos of Greece and Princess Marie-Chantal, Queen Sofia of Spain, Prince Felipe and Princess Letizia of Spain, Queen Margarethe of Denmark, Crown Prince Alexander of Serbia and Princess Katherine, the Grand Duke and Duchess of Luxemburg, King Harald of Norway and Queen Sonia. 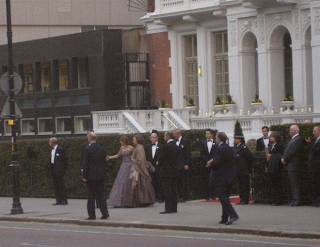 Arrival of the Spanish Royal Family
http://www.telegraph.co.uk/news/uknews/royal-wedding/live/8466247/Royal-wedding-live.html
Posted by Unknown at 10:13 PM