US Media goes gaga for royals

Like guests who whisper asides to their friends from the back pews, the commoners in the media tried to have fun with the royal wedding of Prince William and Kate Middleton for Americans who awoke in pre-dawn hours to watch the pomp.

Most U.S. television networks sent their own royalty to London in a full-scale deployment, with Diane Sawyer, Katie Couric, Matt Lauer, Barbara Walters, Anderson Cooper, Shepard Smith and others donning their finery for the occasion.

"If the Lord Chamberlain didn't send you a formal invitation, well, sorry, join the club," Couric said on CBS News from a position outside Westminster Abbey.

Couric, in a striking pink jacket for what is likely her last big news event at CBS News (she's stepping down as anchor in the coming weeks), immediately seemed more comfortable in a setting that reflected her time on morning television at the "Today" show.

She, like others in American television, couldn't take quite seriously the "breaking news" of the queen of England conveying new titles on her grandson and his bride-to-be.

"What the heck does that mean?" she asked a dour-faced historian sitting beside her.
Her former NBC colleague, Lauer, read the titles and joked that it was going to require "a business card seven and a half inches long. It's going to be huge."

Befitting their own status as the most popular morning show on American television, the "Today" team sat behind a desk decorated with their show's name topped by a large crown.
Fashion was a central focus as the royal guests arrived. Fox News Channel's Smith focused on the tall blue perch of a woman who arrived at the abbey with a man who looked like actor Rainn Wilson of "The Office."

"I don't know where she got that hat, but you know it's going to be a big seller," said the jaunty Smith, who earlier adopted what seemed to be an exaggerated Winston Churchill impersonation in asking Steve Doocy to fill him in on the weather for "this royal morning here across the pond."

"As am I," broadcast partner Cooper interjected. 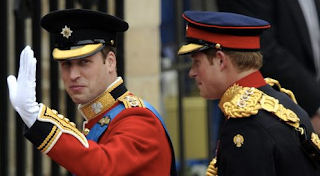 http://royalwedding.yahoo.com/news/media-fun-hats-titles-royal-wedding-095448068
Posted by Unknown at 3:45 AM