Princess Olga of Savoy-Aosta, Duchess of Puglie, gave birth earlier today to a second son, Prince Amedeo. The birth was reported to have taken place in Paris, where Princess Olga's parents, Prince Michael and Princess Marina of Greece, reside.

Amedeo is the second son of the Duke and Duchess of Puglie. Their first son, Prince Umberto, was born in 2009.

The baby, like his elder brother, happens to be among the most royal of royal babies around these days. He is a descendant of King Christian IX of Denmark, King Louis Philippe of the French, Emperor Pedro II of Brazil, Queen Victoria of Great Britain and Tsar Nicholas I of Russia, to name but a few of his ancestors. In fact, Amedeo and Umberto's maternal grandfather, Prince Michael of Greece, is a first cousin of his grandson's paternal grandmother (Claude of France) as well as of his son-in-law's paternal grandmother (Princess Irene of Greece). Aimone of Savoy-Aosta and  Olga of Greece are very closely related. 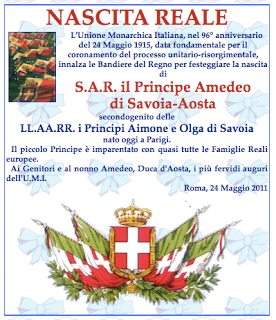