One of my favorite royal women is Queen Olga of Greece (1851-1926). Born Grand Duchess Olga Konstantinovna of Russia, she was the eldest daughter of Grand Duke Konstantin Nikolaevich (one of the sons of Tsar Nicholas I) and of the former Princess Alexandra of Saxe-Altenburg.

Olga married in 1867 King George I of the Hellenes, the second monarch of modern-era Greece, yet the first of his dynasty. Born Prince William of Schleswig-Holstein-Sonderburg-Glücksburg, second of the future King Christian IX of Denmark, he was elected King of the Hellenes and began his reign in 1863. 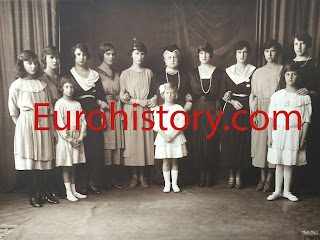 Queen Olga, who was caught in Russia when revolution toppled her cousin the Tsar, managed to make it to the West before the butchery of the Imperial Family began. She witnessed untold misery in her country of birth and returned to an Europe deeply changed.

In exile she settled at the Villa Anastasia in Rome, the home of her youngest son Prince Christopher. She died at Pau, Bearn, France, in 1926.

Queen Olga of Greece, remains one of my absolute favorite royals!