Today, after several months of diligent research, countless interviews and telephone and face time calls, I have finally finished writing the I did it my way – TheMemoirs of HH Prince Andreas of Saxe-Coburg & Gotha.

For the sake of clarity, Prince Andreas is one of my dearest and closest friends. Using years of interviews and countless hours of talks, plus hundreds of pages of notes and private archives, we pieced together a compelling story of a young boy who was taken out of Europe and raised un the United States. Later, when duty beckoned, the young boy now turned into a young man returned home to Germany to take over the legacy that destiny had placed on his strong shoulders.

He is responsible for the rehabilitation of the Coburgs, as well as for setting the dynasty's future on a sound financial course.

The memoirs are a sincere reminiscence of a life dedicated to fulfilling duty and expectations!

I have handed the book over to a few knowledgeable royal watchers and they have all loved it!

Tonight I will start laying text with photos so we can have the book in the hands of our printers by mid-September.

I did it my way – TheMemoirs of HH Prince Andreas of Saxe-Coburg & Gotha will be officially presented at this year's ROYAL GATHERINGS in The Hague Conference, a collaboration between Eurohistory and Hoogstraten English Bookstore! 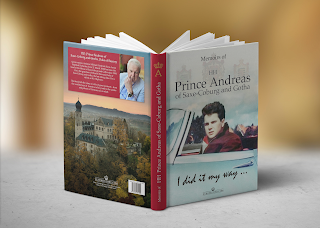