Cashing in on a "royal" Connection

The University of St Andrews followed the precedent set by Edinburgh by ruling that youngsters from the rest of the UK will face annual fees of £9,000 for a four-year degree.
Professor Louise Richardson, the university’s principal, said it is not a “wealthy institution”, despite its alumni including Prince William and Kate Middleton, and the fee represented a “very good deal” for students.

But the decision to impose the highest charges in Britain will infuriate Mike Russell, the SNP Education Minister, and increased speculation he will retaliate by stripping principals of some of their power.

Mr Russell said they could charge up to £9,000 per year for students from the rest of the UK, but predicted they would show restraint. He has argued that higher education should be based on “the ability to learn, not the ability to pay”.
He is due to make a statement to the Scottish Parliament next week about post-16 education and the National Union of Students (NUS) urged him to wreak vengeance by “reining in” principals 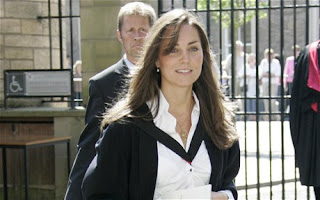 HRH The Duchess of Cambridge
Posted by Unknown at 10:40 AM