Cecil Beaton and the Restoring of the Windsors

When Cecil Beaton received a call from Buckingham Palace in July 1939, nobody was more surprised than Beaton himself. A celebrated fashion photographer with a stellar career at Vogue, and a sought after portrait photographer on both sides of the Atlantic (with the likes of Pablo Picasso, Katharine Hepburn and Marlene Dietrich among his sitters), Beaton was by then more fashion and Hollywood royalty than the House of Windsor.

A prolific diarist, Beaton recorded his first palace call: “The telephone rang, ‘This is the lady-in-waiting speaking. The Queen wants to know if you will photograph her tomorrow afternoon.’ At first, I thought it might be a practical joke… but it was no joke.” Among his most famous work for Vogue in the Thirties was his coverage of the Duke and Duchess of Windsor’s wedding in France in 1937. Though Wallis Simpson and the late Queen Elizabeth the Queen Mother famously loathed each other, the photographs had caught the latter’s eye. The abdication crisis had rocked the nation and the monarchy, and while much of the public regarded Mrs Simpson as a manipulative woman who had ensnared the King, Beaton’s photographs of her wafting around the Château de Candé gardens wearing billowing dresses and a wistful expression created a softer image. 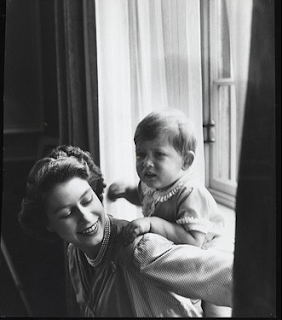 http://www.telegraph.co.uk/news/uknews/queen-elizabeth-II/8994528/How-Cecil-Beaton-helped-save-the-Queen.html
Posted by Unknown at 10:30 AM