The Duke of Edinburgh Gets a Much-needed Break

Since the Queen acceded to the throne 60 years ago, the Duke of Edinburgh has walked one step behind his wife at almost every public engagement. Prince Philip’s heart operation has, however, caused courtiers to carry out a radical rethink of the couple’s working partnership.
Mandrake can disclose that the Duke, who turns 91 later this year, will carry out just one public engagement this month and one in February, the anniversary of his wife’s accession.

After that, the couple’s four children are expected to take turns accompanying their mother on many of the diamond jubilee engagements that were due to be attended by the Duke.
“The Prince of Wales, the Princess Royal, the Duke of York and the Earl of Wessex are all happy to adjust their schedules so that they can accompany the Queen whenever possible,” says a courtier. “The problem is that Her Majesty is reluctant to attend events without the Duke of Edinburgh. She sees their role very much as a partnership.” 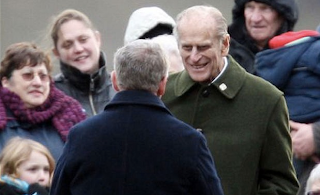