If you've never seen a picture of Denmark's royal family, just picture an L.L. Bean catalogue and you'll get the gist. Today, little Prince Christian, the six-year-old son of Princess Mary and Prince Frederik, donned his preppy best for his first day of school.

Accompanied by his equally chic parents, Christian started kindergarten at the Tranegard School in Copenhagen, making him the first in the family to attend a state school. His father, uncle and two cousins all attended private school.

Because Christian is not only adorable but also second in line for the Danish throne, there was bound to be some media attention on the youngster's big day. But the little prince was unfazed by the scrutiny, posing for pictures and proudly telling reporters how he packed his own school bag all by himself.

Check out pics of the adorable tyke and his beaming parents below. 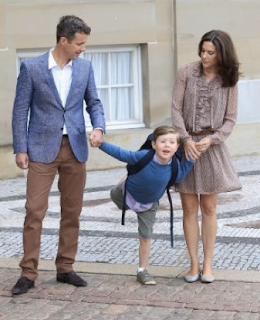