New Book: "I Did It My Way," Memoirs of HH Prince Andreas of Saxe-Coburg & Gotha

I have been hard at work on various projects, books and magazines, that we expect to publish in the second half of 2015.

Presently, I an cooperating with HH Prince Andreas of Saxe-Coburg & Gotha on his memoirs, which will be launched at our yearly ROYAL GATHERINGS in The Hague Conference on November 7-8, 2015!

This event will be followed by an official book presentation in Coburg! 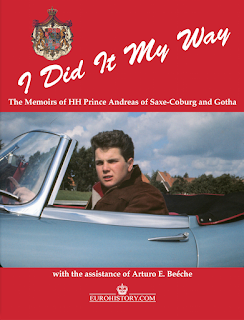