Spain: The Deed is Done – No More Dukes of Palma de Mallorca!

HM King don Felipe VI of Spain has stripped his sister the Infanta doña Cristina of the title of Duchess of Palma de Mallorca, which was granted to her at the time of her marriage (1997) to Iñaki Urdangarín. The wedding was celebrated with incredible pomp and circumstance in Barcelona, a city that has always had an important place in the beleaguered Infanta's heart!

This situation, which I am sure is extremely difficult for all involved, was brought about by the legal problems faced by Mr Urdangarín, who is accused of "exploiting his royal connections to win contracts and embezzle millions in public funds along with a former business partner." Doña Cristina, who was a member of the board of directors of the NOOS Foundation, is being accused of "two counts of being an accomplice to tax fraud."

On the one hand one must accept that all are equal under the law and the King cannot possibly cover for his brother-in-law's missteps. Doing so would be extremely detrimental to the image and integrity of the Crown for the institution above all must survive.

One hopes that these charges will eventually be proven false, although matters do  not seem to be going that way, which is terribly sad for the Infanta, her husband and their children. Surely, King Juan Carlos and Queen Sofía must be equally upset and concerned by the entire fiasco! 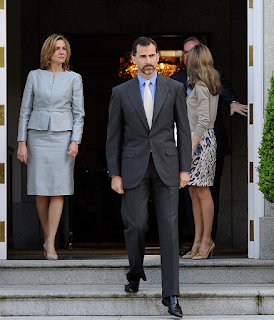 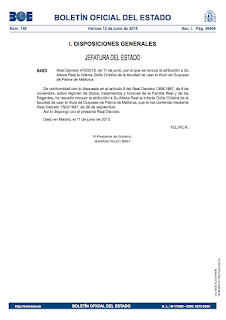