HM The Queen's official birthday celebration took place today in London. Known as "Trooping the Colour," the ceremony always ends with the bulk of the royal family waving to the crowds gathered below the balcony at Buckingham Palace.

To everyone's delight, this was Prince George of Cambridge's first appearance on the balcony and the crowd responded to his wave with clear joy! 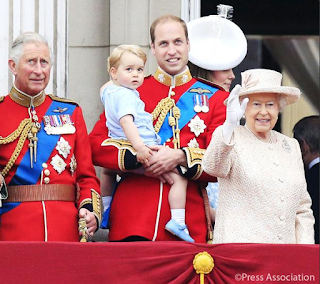 Four generations of English royals, from the left: The Prince of Wales, Prince George of Cambridge on the arms of his father the Duke of Cambridge and HM The Queen.