This was like a Royal Command Performance in reverse; instead of commoners performing for royals, royals performed for commoners in a charity jazz concert.

The event took place in the splendour of Munich’s Prince Regent Theatre, formerly an opera house, which opened in August 1901 with a performance of The Mastersingers of Nuremberg by Richard Wagner.

Charly and the Jivemates sounds like some forgotten band of the Sixties, but in fact, Charly is also His Highness Karl Friedrich, prince of Hohenzollern, 58, head of the princely house of Hohenzollern and great-grandson of the last King of Saxony. He is not just head of the family’s extensive agricultural and forestry business, but a most accomplished lead singer, guitarist and saxophonist. He was accompanied by Paul Müller on the double bass, Peter Schmidt on drums, Norbert Rettenmeier on the saxophone, and pianist Frieder Berlin, all commoners, alas, but none the less accomplished musicians. 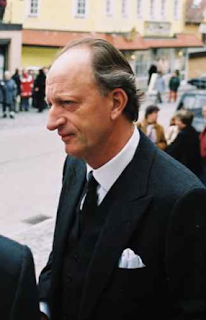