Although his death was last November, since I was ill then, I would like to remind you all and have this obituary be part of our archive...

Zogu's father, King Zog, had been Albania's first and (as it turned out) last royal ruler having, in 1924, as plain Ahmet Muhtar Zogolli, a wealthy Muslim landowner, led a coup d'etat that toppled the government. Four years later, in 1928, Zogolli crowned himself King Zog of the Albanians.

Although his court was compared with the camper flights of fancy seen in Ruritanian operettas, Zog is now considered something of a moderniser who introduced education and language reforms and freedom of worship. But his reign was cut short in April 1939 when Mussolini's troops marched in and the royal family – recently enlarged by the arrival of baby Leka – fled to London, where they occupied most of the third floor of the Ritz Hotel.

The family remained in exile after the war and throughout the 1950s. Following Zog's death in 1961, Albanian monarchists and some sections of the media routinely referred to the defunct king's son as King Leka I, even though Albania's post-war communist rulers had abolished the monarchy in 1946.

Leka I Zogu was born on April 5 1939, the only son of King Zog of Albania and his half-American queen, Géraldine Apponyi de Nagyappony. He was named Crown Prince Skander and his birth was celebrated with a 101-gun salute, but within 48 hours Mussolini's men had invaded. 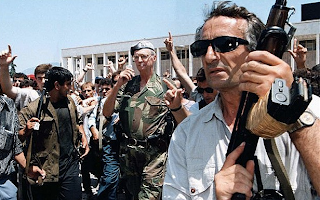 http://www.telegraph.co.uk/news/obituaries/royalty-obituaries/8926722/Leka-I-Zogu.html
Posted by Unknown at 10:51 AM