One must wonder why an otherwise excellent  TV company continues to churn the same old tired story about the German roots of the English Royal Family....


The BBC documentary on George V and Queen Mary was in many ways a suitable prelude to this year’s Diamond Jubilee. Its argument that George V, however unlikely a moderniser, set the monarchy on the path it has successfully followed since, was sound. As the Prince of Wales (the future Edward VIII, later Duke of Windsor) wrote to his father on November 5, 1918, the British monarchy could survive what he described as “the regular epidemic of revolutions and abdications” on the Continent “only by keeping in the closest possible touch with the people” – advice which George V may not have needed, but certainly followed.

In one respect, however, the BBC programme was misleading, and annoyingly so. It placed great emphasis on the Royal family’s German roots. Now, it is true that in 1917, in response to what the historian Roger Fulford called “a very silly outcry – largely engineered from Fleet Street”, George V changed the dynasty’s name from Saxe-Coburg-Gotha to Windsor, and also that on one occasion his eldest son said he was “three-quarters German”. Nevertheless, in saying this he was mistaken, and the Royal family’s Germanness has been much exaggerated. A recent example comes in Norman Davies’s book Vanished Kingdoms. Davies states that the family were essentially German, but “honed their upper-class English accents, threw themselves into patriotic and charitable activities, spoke no German in public, deflected awkward questions, avoided their German relatives, and, in a sustained campaign of genealogical legerdemain, massaged the family tree beyond recognition”. Professor Davies is a distinguished historian; yet even distinguished historians sometimes write what is no better than rot. 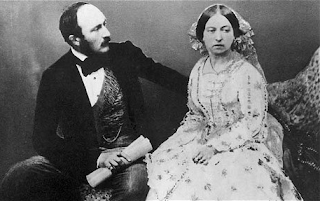 
http://www.telegraph.co.uk/news/uknews/theroyalfamily/8995350/Todays-Royal-family-is-British-to-the-core.html
Posted by Unknown at 10:36 AM