Bringing much-deserved happiness to the extended family of the late Archduke Otto of Austria, on 4 August Count Dominik von Neipperg (b. 1981) married Princess Marie-Anna zu Salm-Salm (b. 1986). The joyous occasion took place at the Church of St Laurentius in Wallhausen, Germany.

Dominik is the third son of Hereditary Count Karl Eugen von Neipperg and of his wife Archduchess Andrea of Austria, eldest of five daughters of the late Archduke Otto of Austria and of his late wife, Princess Regina of Saxe-Meiningen. Dominik has two older siblings (Philipp and Benedikt) as well as two younger sisters (Hemman and Katharina).

Princess Marie-Anna is the fourth of six children of Prince Michael zu Salm-Salm and of his wife, the former Countess Philippa zu Castell-Castell.

Both bride and groom are distantly related as both are descendants of the Princely House of Hohenlohe-Langenburg through their maternal lines.

Dominik Neipperg’s grandmother, Archduchess Regina of Austria (1925-2010), was the youngest daughter of Prince Georg of Saxe-Meiningen (1892-1946), a prisoner of war in a Soviet camp, where he died of malnutrition and abuse. Prince Georg was the eldest son of Prince Friedrich (1861-1914), who was killed in action during the first month of the First World War. Friedrich’s mother was Princess Feodora zu Hohenlohe-Langenburg (1839-1872), herself the youngest daughter of Fürst Ernst and his wife Feodora (1807-1872), née Leiningen. She in turn was the half-sister of Queen Victoria, whose mother, Victoire of Saxe-Coburg-Saalfeld, was firstly married to the Fürst zu Leiningen and secondly to the Duke of Kent.

Princess Marie-Anna’s mother, Philippa zu Castell-Castell, is the daughter of Fürst Albrecht and of his wife Princess Marie Louise zu Waldeck-Pyrmont. In turn Albrecht’s parents were Fürst Carl (1897-1945), who was killed in action by the advancing Soviets, and Princess Anna-Agnes zu Solms-Hohensolms-Lich (1899-1987), a first cousin of Lu Hessen. Fürst Carl’s parents were Friedrich Carl, 1st Fürst zu Castell-Castell, and Gertrud zu Stolberg-Wernigerode. His own father was Count Carl (1826-1886), whose own parents were Count Friedrich Ludwig zu Castell-Castell (1791-1875) and his wife Princess Friederike zu Hohenlohe-Langenburg (1793-1859), herself an older sister of Fürst Ernst, husband of Feodora zu Leiningen.

Dominik and Marie-Anna have known each other since childhood, as both their families belong to the German aristocracy and are involved in the same industries, wine-making being the most dominant one. Their friendship was strengthened further by their involvement in a charity, Courage in Kenya, which Domink and Marie-Anna's brother cofounded along with two other partners. This philanthropic organization provides care for HIV/AIDS sufferers.

The couple have announced that they will settle in Vienna! 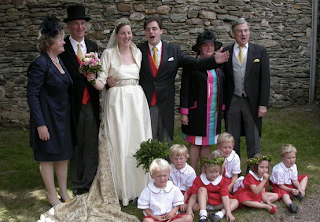 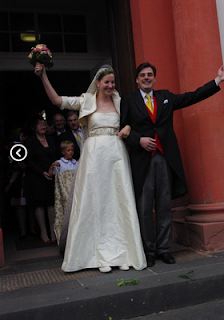