Royal Gatherings (Who is in the Picture) has been a popular feature of European Royal History Journal for several years now.  The first volume covered the 1859-1914 time period
http://royalbooknews.blogspot.com/2013/01/royal-gatherings-by-ilana-miller-and.html
This second volume picks up where the first volume left off in 1914, ending in 1939, thus covering a heady time in European royal history.  This book is divided into 36 chapters, opening with the familiar group photo of the Russian Imperial Family's visit with the Romanian royal family at Constanza in mid-June 1914, only two weeks before Archduke Franz Ferdinand's assassination at Sarajevo.   The final group photo is from the wedding of the Duke of Spoleto and Princess Irene of Greece.
The purpose of Royal Gatherings is to provide biographical details, anecdotes and historical information about the people in the group photos.  The publisher includes more photos from his own collection (and the newly acquired collection of the late William Mead Lalor) to flesh out the stories of these weddings, funerals and family gatherings.
I think my most favorite group photo is of the Dowager Duchess of Saxe-Coburg and Gotha and her three Spanish grandsons sitting on a bench outside the Dolder Hotel in Zurich, Switzerland, in 1916.  Princes Alvaro, Alonso and Ataulfo were the sons of the Duchess' youngest daughter, Beatrice, married to Infante Don Alfonso of Orleans-Borbon, a first cousin of King Alfonso XIII. (Bee was the first cousin of King Alfonso's wife, Queen Ena.)
Baby Bee is one of my favorites, as are her descendants, all of whom are lovely and helpful people.
Some of the group photos are familiar to many readers, including the weddings of Princess Margarethe of Denmark and Prince Rene of Bourbon-Parma, King Alexander of Serbia and Princess Marie of Romania, 70th birthday of Prince Carl of Sweden, 70th birthday of Grand Duchess Maria Anna of Luxembourg, the wedding of Prince Gustaf Adolf of Sweden and Princess Sibylla of Saxe-Coburg and Gotha, and the wedding of the Duke of Kent and Princess Marina of Greece,
There are also some gems, too: the Habsburgs of Teschen,  the family of Infante Don Carlos of Spain, the funeral of Kaiserin Auguste, the wedding of Princess Barbara of Two-Sicilies and Count Franz Xavier of Stolberg-Wernigerode, the Heinrichs of Prussia. and the Hessian Tragedy, the funeral of the Grand Ducal Family.
This is the kind of book that you will dip into many times,  Don't rush through the photos or the text.  Sit back and enjoy the traveling back to a time, edging toward a world-changing war that affected the lives of both commoners and royals.   The 20s were a time of rebirth, new challenges, and then the madness of an collapsed economic system leading to the most deadly of dictatorships, hurling toward a second world war.
Royal Gatherings Volume II is published by Eurohistory.com ($48.95.)   The book is available though Amazon and Amazon.co.uk.
I reiterate the same complaint that I made about the first volume.  The authors have not included a bibliography nor do they cite the quotes they use in the text.  It would help other writers and researchers to do know the source material - and to see where the quotes come from.  The addition of a bibliography and citations would only enhance this book's worth.


To purchase your copy... 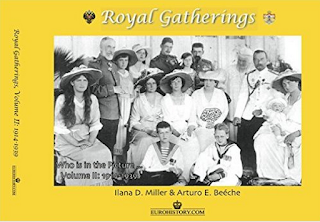