Obituary: The Maharaja of Jaipur

Given the nickname "Bubbles" by his British nanny because of the gallons of champagne consumed at his birth, Bhawani Singh became 39th head of Kachwaha clan of Rajputs and Maharaja of Jaipur following the death of his father, Sawai Man "Jai" Singh II, at a polo match in Cirencester in 1970. The following year the princes' privy purses, and other privileges they had been guaranteed when they surrendered their powers at Independence, were abolished by the then Prime Minister Indira Gandhi through a constitutional amendment.

In 1958 Jai Singh had become the first of the princes in Rajasthan to turn his principal residence, the Rambagh Palace, into a luxury hotel. The palace was eventually leased in 1972 to the Indian hospitality company the Taj Group. Subsequently several more of the family's palaces also became five-star hotels. In consequence Sawai Bhawani Singh, who counted Bill Clinton and Mick Jagger among his friends, became one of the richest of India's maharajas.

Later on his son-in-law, Narendra Singh, reclaimed management control over some of the family properties, including the City Palace, and the Maharaja became a titular host for special events such as corporate-incentive nights. He was unconcerned when some of his peers turned up their noses at such commercialism: "I find an answer in our ability to make our heritage relevant to the changing times," he explained, dismissing his critics as mostly ageing contemporaries who "can't bring themselves to see reality and are still in the age of the 18th century. They are maharajas, and I am a businessman." 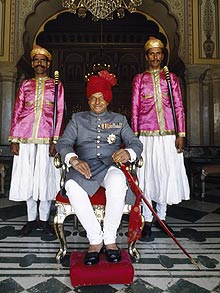 http://www.telegraph.co.uk/news/obituaries/royalty-obituaries/8459319/Brigadier-Sawai-Bhawani-Singh.html
Posted by Unknown at 10:02 PM