An eloquent champion of conservation, he lectured all over the world and sat on a breathtaking array of architectural and amenity bodies. He was chairman and later president of the Society for the Protection of Ancient Buildings, and also chaired at various times the Historic Churches Preservation Trust, the Architectural Heritage Fund, the Church of England’s Cathedral Advisory Commission and Sir John Soane’s Museum.

He was a member of the Historic Buildings Council from its foundation in 1953, and until he succeeded his father in 1970 he was the National Trust’s administrator for Sussex and Kent, and later East Anglia. He was also vice-chairman of the National Portrait Gallery.

Hugh Grafton’s commitment to conservation was as wholehearted as it was selfless, as his position on various public funding bodies meant that he never felt it right to apply for public money to help in the maintenance and restoration of his own family seat, Euston Hall, near Thetford in Norfolk. When, in 1975, he opened Euston, with its magnificent art collection, to the public for the first time on a regular basis, he gave all proceeds from its 4,000 or so annual visitors to charity. “It really doesn’t pay for some of the smaller houses to open to the public,” he observed, “but I felt I had to set an example.” 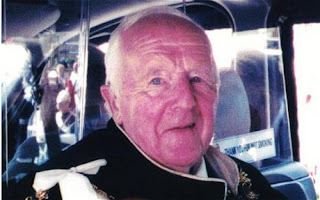 http://www.telegraph.co.uk/news/obituaries/royalty-obituaries/8444090/The-Duke-of-Grafton.html
Posted by Unknown at 9:48 AM