Can the Aunt-Heap Find a Rebirth

What greater testament to a happy childhood could there be than wanting to raise your family in the home where you grew up? Kensington Palace, the 17th-century royal residence surrounded by Kensington Gardens, is where Prince William was brought up, and where, it is rumoured, he plans to return with his wife once his stint as a search-and-rescue rescue helicopter pilot at RAF Valley in Anglesey has been completed.
The palace was once home to five successive monarchs and the birthplace of Queen Victoria; in the Sixties Princess Margaret transformed it into the hub of swinging London, where the likes of the Rolling Stones and Peter Sellers would attend A-list parties.

More recently, the palace has become the sentimental focus for visitors who come to dwell on the death of Diana, Princess of Wales, leaving flowers at the gates on the anniversary, August 31.

Heartfelt though those gestures may be, they have tended to draw attention away from the fact that this is where Charles and Diana brought up their sons, William and Harry, hearty, energetic boys who burnt off their energy racing through the corridors and playing in the gardens. “It would be lovely if William and Kate were to return and continue the story,” says Lucy Worsley, chief curator at Historic Royal Palaces and author of Courtiers, The Secret History of Kensington Palace.

“The palace is split between the public areas and the royal household – although there is a big underground conduit between the two – but even if she is discreetly concealed behind high walls, the idea of a new Princess in residence would be fabulous.” 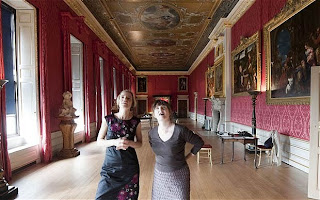 http://www.telegraph.co.uk/news/uknews/theroyalfamily/8430316/A-Royal-Home-awaits-its-renaissance.html
Posted by Unknown at 9:04 AM