The Rise of the House of Middleton

LONDON, United Kingdom - Descended from coal miners, the family of royal bride-to-be Kate Middleton is held up in class-obsessed Britain as a shining example of social mobility.

Kate may have attended one of the most elite schools in England before going on to Scotland's most prestigious university, but the origins of the woman who will marry Prince William on April 29 are decidedly humble.

"The Middletons are really, really interesting because they offer an example of social mobility across the generations," said Professor Diane Reay, a sociologist at Cambridge University.

The Middletons' rise through the social ranks began in the mining village of Hetton-le-Hole, near Sunderland in northeast England.

Life was not easy for Kate's great-great-great-great-grandfather, James, who moved to the village from the nearby city of Newcastle in 1821 seeking work and found himself toiling underground in perilous conditions.

In 1918, Kate's great-grandfather on her maternal side, Thomas Harrison, made the decisive break, deciding he would never go down the pit. Instead, he trained as a carpenter and eventually settled in Southall, west London.

Her father's side of the family were solid citizens of 19th-century England: drapers, legal clerks and bank workers before, finally, in the mid-20th century, her grandfather Peter became first a Royal Air Force pilot and then flew airliners.

Kate's mother Carole met her father Michael while working as an air hostess. He worked for an airline's ground staff as, among other things, a dispatcher of aircraft.

Earlier in her relationship with the prince, it was rumoured that his aristocratic friends would whisper "doors to manual" when she entered the room -- the instruction a pilot gives to his crew after landing, and intended as a derogatory comment on her mother's former job.

Carole has had to contend with class-related barbs from the British press. 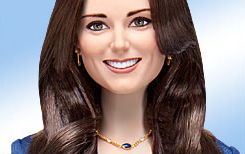 http://www.abs-cbnnews.com/global-filipino/world/04/11/11/mines-palaces-upwardly-mobile-middletons
Posted by Unknown at 9:26 AM