Diana's Presence at the Royal Wedding

Five months ago, when Prince William first announced to the world he’d given a ring to Kate Middleton, he made it clear that only one other woman mattered as much to him.

"It's my mother's engagement ring,” he told the press of the sapphire and diamond engagement heirloom. “Obviously she's not going to be around to share any of the fun and excitement of it all -- this was my way of keeping her close to it all."

During every step of their path down the aisle, Kate and William have made a point to keep Lady Diana’s memory alive. Today’s wedding was no exception. They recited their vows at the Westminster Abbey, the historic church where Diana’s memorial was held for 3 million mourners in 1997. Then, William was just a teenager, and his solemn march behind his mother’s coffin was in stark contrast to the beaming stride he took down the aisle today.

But the church itself wasn't the only reminder of Diana's parting. Bishop of London Richard Chartres, who also spoke at Diana's memorial, gave the wedding sermon. And during the musical portion of the ceremony, the first hymn sung was "Guide Me Thou, O Great Redeemer," the same song that concluded Di's funeral service and memorial service, 10 years after her death.

The focus wasn't only on Di's absence, but on the memory of her vibrant life. As Kate walked down the aisle in Alexander McQueen , every bit the breathtaking bride her mother-in-law was in 1981, she clutched a bouquet of Sweet William dotted with Lily of the Valley, a staple of Diana's wedding bouquet. And when it was time to say her vows, she again summoned Di’s independent spirit, by omitting the term “obey”. It was the one battle Diana Spencer picked when she agreed to marry Prince Charles. At the time, the break in tradition caused outrage among royal-watchers. Today it’s a testament to Di’s courage and trail-blazing choices. 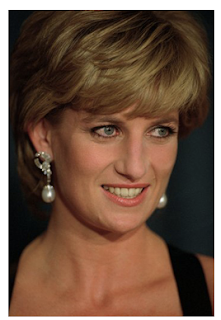 http://royalwedding.yahoo.com/blogs/prince-william-and-kate-middleton-honor-diana%27s-memory-7037
Posted by Unknown at 10:59 PM