In This Fairy Tale, Not One, but Two Queens in Waiting

LONDON — When 1,900 invited guests take their coveted places in Westminster Abbey next week for the wedding of Prince William and Kate Middleton, one of the most uneasy seats in the 13th-century Gothic church may be the one occupied by Camilla, Duchess of Cornwall, the longtime lover of Prince Charles, and since her marriage to the heir to the throne in 2005, the stepmother to William, Charles’s older son.

One of the most compelling themes of the April 29 wedding will be Britain’s odd-couple pair of “queens-in-waiting,” Ms. Middleton and Camilla. Though more than 30 years apart in age, both have come to their marriages as what are known in Britain as commoners, and stand, on their husbands’ ascent to the throne — Camilla first, and later Kate — to take their places as the highest-placed women in the land.

There, mostly, the similarities end.

Kate, glamorous and young — 29, five months older than Prince William — is seen by many in Britain, along with her future husband, as the potential savior of a monarchy whose luster has been deeply tarnished in the past 30 years.

For all the public acclaim for Queen Elizabeth II, who turns 85 this week and celebrates her 60th anniversary as monarch next year, the story of the other members of the royal family has been one of serial divorces, personal indiscretions, extravagance at taxpayers’ expense and suspicious financial dealings that have made lurid copy for Britain’s tabloid press.

Camilla, once cast by the tabloids as the most hated woman in the country for her role in dooming Prince Charles’s marriage to Diana, Princess of Wales, has gone some distance toward redeeming herself in recent years, to judge by polls that show sharply reduced levels of personal antipathy toward her.

She has been embraced by Diana’s two sons, William and Harry, who have said publicly that they love her, not least for the happiness she had brought their father.

The sense of her having achieved insider status in the family, at least with the younger generation, was enhanced when she was photographed this year emerging from a tête-à-tête lunch with Kate in a London restaurant, where she was overheard amid peals of laughter urging the bride-to-be to follow royal tradition — and Diana’s precedent — by wearing a jeweled tiara at the wedding, something Ms. Middleton apparently thought was too fusty for her taste. 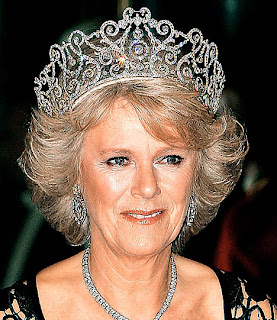