The last remaining survivor among the grandchildren of the Princess Imperial of Brazil, Izabel, and her husband Gaston, Count 'Eu, passed away today (18 April 2011) at Estoril.

Princess Teresa d'Orléans-Bragança (1919-2011) happened to be the aunt of many important European royals, among them: the Count of Paris, the Duchess of Württemberg, the Duchess of Calabria, the Duke of Bragança, and the Duchess of Segorbe (former wife of Crown Prince Alexander of Yugoslavia).

She remained unmarried after her father's unexpected death in 1940, becoming, as was the old tradition, her mother's companion. Prior to her father's death, Teresa was in love with her cousin Prince don Carlos of Bourbon-Two Sicilies, older brother of her future sister-in-law Esperanza, wife of Teresa's own older brother Pedro Gastão. However, Prince don Carlos died in the Spanish civil war, much to Teresa's distraught.

A loyal companion to her mother, Teresa was nearby when the Princess Elisabeth died in 1951. Six years later Teresa finally settled down married Dom Ernesto Martorell y Calderó (1921-1985), a wealthy Portuguese businessman of Spanish extraction. By her husband, Teresa had two daughters. 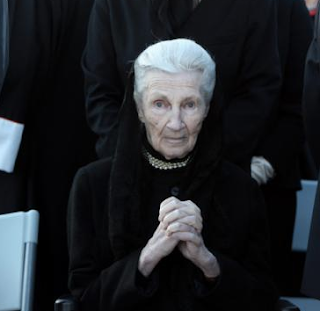