Prince Philip was born on 10 June 1921 on the Mediterranean island of Corfu. The great-great-grandson of Queen Victoria, and a Prince of Greece and Denmark, he was the youngest of five children and the only son of Prince and Princess Andrew of Greece. After attending schools in France, Germany and Britain, he joined the British Royal Navy, where he served with distinction during the Second World War. On returning from his duties with the British Pacific Fleet in 1946, his naval career continued, and his relationship with his third cousin, Princess Elizabeth, elder daughter of King George VI and Queen Elizabeth, grew.

In February 1947, Prince Philip became a naturalised British subject, renouncing his royal title and taking the name Philip Mountbatten. Five months later, on 10 July 1947, the engagement of Lieutenant Philip Mountbatten and the 21-year-old Princess Elizabeth was announced. Shortly before their marriage on 20 November 1947, King George VI named his future son-in-law Duke of Edinburgh, Earl of Merioneth and Baron Greenwich with the style of His Royal Highness, and he was appointed to the Order of the Garter. On the King’s death in 1952, Princess Elizabeth acceded to the throne as Queen Elizabeth II. Since then, the Duke has undertaken countless public duties, accompanying The Queen on all her Commonwealth Tours and State Visits overseas, and acting as Patron or President of some 800 organisations. 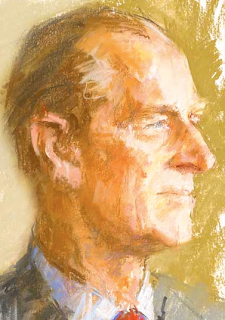 http://www.royalcollection.org.uk/microsites/princephilip/
Posted by Unknown at 8:45 AM