I have attached a link to youtube footage of the incident...the extent of the damaged caused by both fire and water used to fight the flames is not yet known!

The Belosselsky-Belozersky Palace is a Neo-Baroque palace at the intersection of the Fontanka River and Nevsky Prospekt in Saint Petersburg, Russia. The mauve-colored palace mirrors the Stroganov Palace, designed by Bartolomeo Rastrelli in the 1750s and situated on the opposite site of the Nevsky.

The first Belosselsky-Belozersky Palace was built on Nevsky Prospekt in 1747 for Prince Mikhail Andreevitch Belosselsky (1702-1755) during the reign of Tsarina Elisabeth Petrovna; the building, far smaller than it is today, was designed in the French style with a large private garden and a launch onto the canal, stuccoed and painted in imitation of Parisian limestone.
Inherited by his son - Prince Alexander Mikhailovitch Belosselsky (1752-1809) - it was he that bought a plot of land in 1800 which allowed the building to be greatly extended. Prince Alexander Mikhailovitch was a close friend, supporter and devoted servant of Tsar Paul I. Due to the relationship between the two, Paul I allowed the revival of, in 1800, the ancient title of Prince of Belozersk. It was from then on that the family would be known as the Belosselsky-Belozersky family. The Rurikid princely double name Belosselsky-Belozersky is also given to their palace.

Alexander Mikhailovitch' second wife, Anna Grigorievna (born Kozitskaya; father was a Secretary of State to Catherine II, Gregory Vassilievich Kozitsky; he was also rector of Moscow University. Anna Grigorievna's portrait by the well-known French and Russian court portrait painter Vigee Le Brun is in Washington DC's National Museum of Women in the Arts, was an heiress of a great fortune through her mother, Ekaterina Ivanovna Myasnikova. This allowed further purchases of land in St. Petersbug, including the Krestovsky island as well as further additions to the Belosselsky-Belozersky palace. The palace passed down the family line to Esper Alexandrovitch Belosselsky-Belozersky (son of Alexander Mikhailovitch) who died at a young age. His widow, Princess Elena Pavlovna Belosselskaya-Belozerskaya (ne'e Bibikova) was the owner of the palace until the majority of Konstantin Esperovitch Belosselsky-Belozersky (the only son of Esper Alexandrovitch and Elena Pavlovna).

It was from Elena Pavlovna that the palace gained its present lavish appearance. In addition to the Belosselsky-Belozersky wealth, stemming from their south Urals metal works, Elena Pavlovna also inherited a fortune from her own family, the Bibikovs (and from her father's mother, born Tatiana Jakovna Tverdychev, whose father was the brother of the original Urals mining and metals entrepreneur Ivan Borisovich Tverdychev, the founder of the same above noted Urals' fortune and originator of the Tverdychev-Myasnikov's family partnership). She decided to update and reconstruct the palace to suit her taste. She had the old building knocked down and had a new palace built under the control of one Andreas Stackensneider the court architect of Tsar Nicholas I of Russia. In order to do this, the princess had to petition Emperor Nicholas I for permission to commission his services. She got permission from the Emperor and the palace was the only private commission of Stackenscheider in the city. The princess remarried to Prince Vassili Viktorovich Kochubey, son of Viktor Kochubey, and grand-son of the first Prince Kotchubey, Viktor Pavlovich.

When the son of Princess Elena Pavlovna, Prince Konstantin Esperovitch Belosselsky-Belozersky gained his majority he inherited the palace and lived there with his wife (née Nadezhda Dimitrievna Skobeleva) and their many children. The prince more often living at a smaller home on Krestovsky Island (Krestovsky Ostrov), the vast Belosselsky-Belozersky Palace was a huge drain on the family resources, which had seen better days.

The palace was put up for sale around the time of the engagement of Grand Duke Sergei Alexandrovich of Russia to Princess Elisabeth of Hesse and the Rhine in 1883. The couple, who needed a suitable residence in the city, found the building and it was made their principal residence after its purchase by Sergei Alexandrovich. It was he who gave the palace its present red exterior.

Under the ownership of Grand Duke Sergei Alexandrovich, the palace had yet another extensive remodeling and the interior was redone. The redecorating included adding a vast library and a Slavic revival chapel. The couple never had children of their own, but their Il’yinskoye estate was usually filled with parties that Elizabeth organized especially for children. They eventually became the foster parents of Grand Duke Dmitri Pavlovich of Russia and Grand Duchess Maria Pavlovna, Sergei’s niece and nephew through his younger brother., Paul Alexandrovich.

Grand Duke Sergei Alexandrovich was a radical conservative and his policies made him a polarizing figure. In 1892, as the governor of Moscow, he executed the state's order and expelled the large portion of the Jewish population from the city. He was assassinated by a terrorist bomb at the Kremlin on February 17, 1905. The palace was then the property of his widow who became a nun in 1909. She went to live at the Marfo-Mariinsky Convent and willed the palace to her ward Grand Duke Dmitri. He in turn sold the palace just prior to the outbreak of the Russian Revolution.

Footage of the fire... 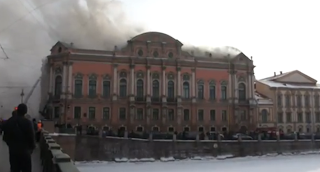