Jaipur: The last titular Maharaja of Jaipur Brigadier Sawai Bhawani Singh died at a private hospital in Gurgaon after prolonged illness.
The Jaipur royal died late on Saturday night due to multi-organ failure, family sources said in Jaipur. He was 80.
Singh, the head of the Kachwaha clan of Rajputs, was admitted to hospital on March 29. His funeral will take place at 'Gaitore Ki Chatriya' in Jaipur on Monday, the sources said.
Born to Maharaja Sawai Man Singh II and his first wife Marudhar Kanwar of Jodhpur, Sawai Bhawani Sing was married to Princess Padmini Devi in 1966.
The royal couple have one daughter Princess Diya Kumari.
Singh also served in the Indian Army and received numerous honours including a promotion to the Presidential Bodyguard.
He was awarded India's second-highest gallantry award, the Mahavir Chakra, for leading troops inside Pakistani territory in Sindh region and attacking and destroying many Pakistani posts during the Indo-Pak war of 1971.
He was also promoted to the rank of Brigadier in 1974.
Singh, also a polo player, ascended the throne of Jaipur in 1970 following the death of his father and remained the official Maharaja of Jaipur until the abolition of royal entitlements by the government.
He also contested Lok Sabha elections in 1989 from Jaipur on Congress ticket but was
defeated by rival party BJP's Girdhari Lal Bhargav.
Bhawani Singh was the 40th Maharaja of Jaipur and the 11th ruler as per the tradition of Amber.
He adopted Padmanabh - the son of his daughter Diya Kumari and son-in-law Narendra Singh - who will now be ascended to the throne as per the tradition of the royal family, the family sources said. 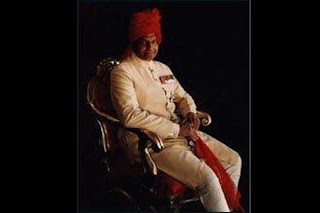 http://ibnlive.in.com/news/maharaja-of-jaipur-bhawani-singh-passes-away/149436-3.html
Posted by Unknown at 8:35 AM