Duke and Duchess of Norfolk to Separate – Love on the Rocks!

With just over two weeks before the celebrations for Prince William’s nuptials, the Queen has been saddened to learn that the marriage of her Earl Marshal, the Duke of Norfolk, has come to grief.

After 24 years and five children, Edward Fitzalan Howard, 54 —the country’s premier duke and the most senior lay member of the Roman Catholic Church in Britain — is separating from his pretty wife, Georgina, 49.

And perhaps to avoid possible embarrassment, neither he nor the Duchess will be going to William and Kate’s wedding.

According to friends, he is preparing to move out of historic Arundel Castle in West Sussex.
The couple’s separation comes just months after the Queen’s cousin Lord Brabourne abandoned his stately pile, Broadlands in Hampshire, and went to live in the Caribbean with his mistress.

However in this case, his Grace, a former racing driver, maintains that there is no new love in his life. 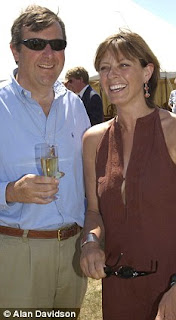 
http://www.dailymail.co.uk/news/article-1376614/Duke-wife-separate.html#ixzz1JbyW0qJn
Posted by Unknown at 9:53 AM