More on Prince William of Wales

Nobodies may fantasise about being princes, but not so avidly as some princes hanker to be nobodies. The last time Prince William had the thrill of being unknown was in Botswana’s Okavango Delta last year. “The locals haven’t got a clue who I am, and I love that,” he said.

Our future king’s moments of anonymity are disappearing faster than the muddy waters under his small expeditionary boat but his pursuit of a balanced, reasonably unconstrained life, running a professional career alongside the thankless role of apprentice king, is stronger than ever. He says he has no intention of being “an ornament”.

Most of his early adulthood has been an exercise in the difficult art of being both royal and real, recognising his responsibilities but getting on with what he calls normal “stuff”. People find him direct and likeable, “a strong, powerful sort of guy” with all-round action-man competence and a presence . “Very confident, very normal and very sensible,” says one of his friends. “He knows himself.”

Isn’t this the one really remarkable thing about Flight Lieutenant William Wales – his hold on normality? The sight of him as a 15-year-old boy, apparently frozen in shock, walking behind his mother’s coffin , is an image that filled every onlooker at the time with pity and foreboding. 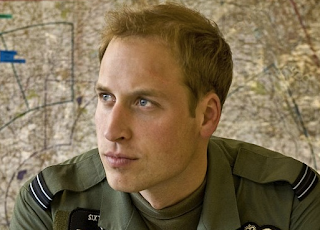 http://www.telegraph.co.uk/news/uknews/royal-wedding/8136686/Royal-wedding-profile-of-golden-boy-Prince-William.html
Posted by Unknown at 11:01 PM