Thirty years ago this month every issue of every popular newspaper ran stories and pictures virtually every day about the upcoming royal wedding.

Though it was still three months off, the papers were full of material about Lady Diana Spencer. She was editorial catnip. Editors loved her because the public loved her. She was about to become the Princess of Wales but they rightly anticipated that she was on her way to becoming their Princess of Sales.

The contrast between the media coverage during the buildup to that 1981 wedding of Charles and Diana and the treatment of this month's wedding of Prince William and Kate Middleton is marked.

Newspapers have found it difficult to find anything to write about. There have been few pictures because there have been few, if any, photo opportunities. Clearly, that is just what the couple wish. It follows a pattern throughout William's life – at school, at university, in the household cavalry, now in the air force – during which he has successfully sought to maintain a low profile.

Similarly, his bride-to-be has followed suit. She has never made the slightest error by offering up an inappropriate quote. Nor has she made friends with any journalist. 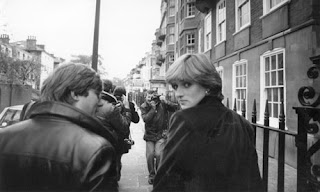 http://www.guardian.co.uk/media/2011/apr/04/press-kate-middleton-princess-diana
Posted by Unknown at 9:42 PM