Interview with Prince Michael of Bourbon-Parma

By John Nelander Special to the Daily News


Michel’s a man who led a life of danger.

He was a teenage war saboteur who blew up German military vehicles by hiding explosive devices inside piles of cow manure on the roads of World War II France. He blew up trains and learned how to rig a toilet to explode and kill an enemy officer trying to flush it.

He jumped from one war to the next, parachuting into Vietnam in 1945 and getting taken prisoner the same day. He tried to escape, was recaptured and tied up in the center of small jungle village where women and children took turns beating his naked body with sticks.
He finally won his freedom after 11 months and was discharged from the French army to start a brand new life.

Prince Michel de Bourbon-Parme was only 17 when he was recruited by the Office of Strategic Services, the World War II forerunner of the CIA. His father had given him permission to join the U.S. Army and he finished his basic training at Fort Benning, Ga., when the new intelligence agency scooped him up.

The army was impressed with the kid who had fled France with his family after Nazi occupation began in 1940. He could speak fluent French, English and Danish. “They said we need people like that,” recalls Bourbon-Parme, whose mother was a Danish princess and father a descendant of French royalty. 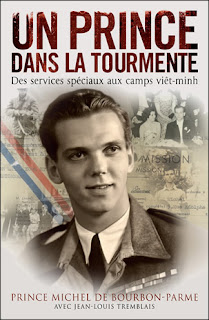 http://www.palmbeachdailynews.com/news/french-born-prince-and-part-time-palm-beacher-1356162.html?viewAsSinglePage=true
Posted by Unknown at 10:18 AM