Freddy the Naughty prince is Back!

Only days before the christening of his baby twins, Crown Prince Frederik was filmed at a night club in a drunken encounter with an unknown blonde last Saturday night.

While Crown Princess Mary and the rest of the royal household were working hard to arrange tomorrow’s christening of the royal couple’s twins, her husband was partying away at his favourite Copenhagen night club, Simons, reports Se og Hør magazine.

The magazine is in possession of amateur video footage from inside the club, where the future king is seen drinking and dancing with a woman. The video shows the two in warm embraces, and at one point it looks as if Frederik is about to fall down on the floor, only to be caught by the woman whom Se og Hør refers to as “the blonde”.

Frederik left the club at 3.30 in the morning. The magazine could not say whether or not he left on his own.

Princess Mary has previously scolded her husband for his wandering eye, and there may well be some stiff smiles at tomorrow’s christening, reports B.T. newspaper.

Simons night club is currently trying to track down the person who filmed the incident and either gave or sold it to Se og Hør. “Whoever this person may be, they are not welcome in our club again,” said Simon Lennet, the owner of the club. 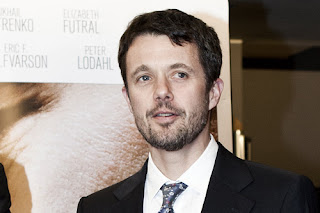 http://www.cphpost.dk/news/136-royal-news/51430-drunk-crown-prince-at-disco-with-unknown-blonde.html
Posted by Unknown at 9:15 AM