Prince Harry said today that sleeping in a tent in the Arctic was not something he had ever planned on doing - but it was "nice" to feel the cold last night.

As he packed up his kit and jumped up and down to stay warm, The Prince was asked what it was like to sleep in temperatures as low as minus 25C.

The Prince spent the night in a tent with Inge Solheim, who will be leading an expedition of wounded servicemen to the North Pole, and Henry Cookson, who has been training Prince Harry for when he joins the trip for the first five days.

Prince Harry is Patron of the Walking With The Wounded charity, which wants to raise £2 million to help injured servicemen find work and peace of mind after they leave the armed forces.

He has spent the last three days with the team who are making the trek, made up of four wounded soldiers, two charity co-founders and Mr Solheim.

Prince Harry, third in line to the throne, said the rest of the day will be spent getting ready.

"I think we're preparing for leaving, which is going to take a while," he said.

Asked how he was feeling about the trip, he said: "Good. I think it got down nice and cold last night.

"It was nice to feel it, but it's going to be different.

"Here, at least we're on ground. Spending the night on frozen ice wasn't something I had planned on doing, but everyone else is doing it, so I might as well do it as well."

Prince Harry ate a breakfast of hot cereal this morning, and enjoyed the luxury of lighting a stove to keep warm, something the team will not be doing in the frozen wasteland.

He said: "It was a cold night, and it was good because we got to practise all our tent routines. It was really good."

Asked how The Prince is getting on, he said: "I think he is a bit sceptical. We had less than minus 30C last night, and it was quite cold. 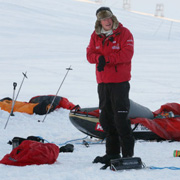 http://www.princeofwales.gov.uk/newsandgallery/news/prince_harry_continues_his_walking_with_the_wounded_training_1843948648.html
Posted by Unknown at 6:47 AM