The Duke of Cambridge's brother-in-law to be – James Middleton

As Prince William and Kate Middleton make their wedding vows on Friday, one person a few feet from the royal couple is likely to have his BlackBerry switched on (albeit on silent). Sitting across the aisle from no less a figure than Prince Charles in the third row of the Northern Lantern of Westminster Abbey, James Middleton could be forgiven a quick peek at his emails while he waits for the bride to arrive.

For Kate’s younger brother has seen his upmarket bakery business, Cake Kit Company, take off in recent months. So much so, that the 23-year-old is in the process of launching three more companies. In the past fortnight, James has registered these businesses at Companies House: Nice Cakes, Nice Wine and Nice Group London. Notably, all three have been registered to the family’s Berkshire trading headquarters, home of the successful Party Pieces firm, which has made the Middletons a fortune.

A friend of the young entrepreneur says: “There is no doubt about it, James would like to be the next Richard Branson. He is surfing on the crest of a wave at the moment. All his friends think he will make serious money.” 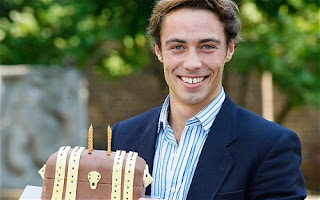 http://www.telegraph.co.uk/news/uknews/royal-wedding/kate-middleton/8474786/Royal-wedding-the-very-ambitious-Mr-Middleton.html
Posted by Unknown at 1:07 AM